Please see my latest posts on Beethoven and four June 2011 posts about modern music and recommended performances. Also, Beethoven appears as a character in my novel "Hungry Generations" (about the friendship between a young composer in L.A. and a great emigre virtuoso pianist in the early 70s) - an excerpt is in one of my early blog posts.

Piano Sonata No. 29 in B Flat Major

My novel's main character the aging pianist Alexander Petrov achieves some incredible effects in his performances, particularly of Schoenberg, who is one of 'the three bald geniuses' haunting the other main (and younger) character Jack Weinstein's imagination (along with Igor Stravinsky and Bela Bartok). The significant effects achieved by the playing of the novel's pianist Petrov are suggested by, among others, Vladimir Horowitz's incredible performances (for example, he recorded the Scriabin Sonata #3, which the son Joseph Petrov performs in the novel: http://www.amazon.com/Horowitz-Plays-Scriabin-Alexander/dp/B0000CF325/ref=sr_1_2?s=music&ie=UTF8&qid=1296340283&sr=1-2 or http://www.amazon.com/Horowitz-Plays-Scriabin-Alexander/dp/B000003EOZ/ref=sr_1_1?s=music&ie=UTF8&qid=1296340283&sr=1-1, which contains the third sonata). Similarly, there is Sviatoslav Richter's powerful performance, for example, of Scriabin, Debussy, and Prokofiev (with a range of sound from immensely forceful to terrifically gentle, a range akin to that imagined for Sasha Petrov): http://www.amazon.com/Scriabin-Debussy-Prokofiev-Sviatoslav-Richter/dp/B00000E3ZX/ref=sr_1_5?ie=UTF8&s=music&qid=1296340158&sr=1-5

I'm glad that now over seven thousand of you have connected to this blog post, and it would be wonderful if any one of you know of, or have contact with, a publisher (or agent) who might be interested in a novel like this one; if so, or in any case, please do leave a comment, perhaps about what draws you to this post, or email me at danielcmelnick@gmail.com.
PATHOLOGICAL STATES
--a novel in the form of a family memoir 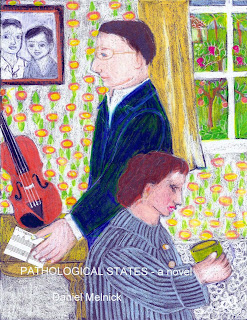 “It is strange. If you talk to the good gentleman about anything that does not touch on his madness, far from talking nonsense, he speaks very rationally and shows a completely clear and calm understanding.”
—Cervantes, Don Quixote

Part One: Phlegmatic 3
i. Jupiter or Neptune 4
ii. Phlegm and Torpor 23
iii. Sandra Perez Weisberg 36
iv. A Sac Within A Sac 48


Prologue
The best way to put yourself in a novel, a wise friend once told me, is to leave yourself out. Not only have I removed myself here, but this prologue also leaves out my hero, spry but aging as he is, Dr. Morris Weisberg, pathologist and sometime Chief of Laboratory. Here, instead, you are to meet an antagonist, Dr. Bill Smith, who will appear again later but significantly at the Montecito Veterans Hospital, located on the northern rim of Los Angeles in the desiccated hills some miles from suburban Northridge. Of course, these designations – hero or antagonist – are provisional, even questionable, and you must exercise your inalienable right as reader to revise and even to reverse them. For example, it would be possible to present Dr. Smith as a wielder of knife and scalpel, a slayer of disease, a marbled statue of power and grandeur.
In the event, however, the surgeon - other than being a drunk - seemed perfectly ordinary: not too short, nor too tall, and not too fat, though with a round face which was sometimes clouded, for his mouth could appear disapproving, and his brown eyes were somewhat assessive behind corrective lenses. On this June morning, dressed in his surgical garb, he wiggled his stiff fingers into latex gloves and felt how recalcitrant they were as he forced them in. Last night had been what he called a long, hard night, but let bygones be bygones, he thought. Smiling and a bit bleary, he strode confidently into the brightly lit surgical theater. He would perform an exploratory, which he invariably enjoyed.
The poor girl was dying, but now prepped and anaesthetized, she was stretched out on the operating table.
“Good morning, Dr. Smith,” the nurses said as did the new anesthesiologist, Dr. Maury – he was a handsome man; swarthy was the term. The line of his strong neck led down to broad shoulders and what looked to be a lean, fine physique below. Dr. Maury smiled politely at him, and Dr. Smith immediately turned to look at what was on the menu today.
The skin of the abdomen was bared before him as he picked up the scalpel with his stiffened fingers. Perhaps he would give her a few months more of life, he thought as he automatically cut through flesh, fat, and muscle. His nurse placed clamps and a drain so no profusion of blood would well in the cavity. At its bottom, there it was, the pancreas riddled with cancer. Searching for spreading metastases in liver and spleen, his rough fingers pushed the pancreas aside.
The heart monitor began irregularly to beep, and it stopped.
“Dr. Smith, her heart has…”
A slight tremor convulsed the body on the table, and Dr. Smith pulled his bloody gloved hands away.
“Adrenaline. Syringe,” he said as he glanced about, numb and unsteady. Dr. Maury was staring alarmed at him.


He plunged the needle into the heart. Immediately, he knew it had missed its target, and he lifted, shifted, and plunged it once more into the heart’s chamber.

Part One: Phlegmatic
i
Jupiter or Neptune