Here's the link to John Petkovic's fine article about "The Ash Tree" in The Plain Dealer:
http://www.cleveland.com/entertainment/index.ssf/2015/10/cleveland_author_honors_armeni.html

In addition, let me place here the also fine review of the novel which appeared on October 10 in the Armenian Mirror-Spectator (the text is reproduced below): 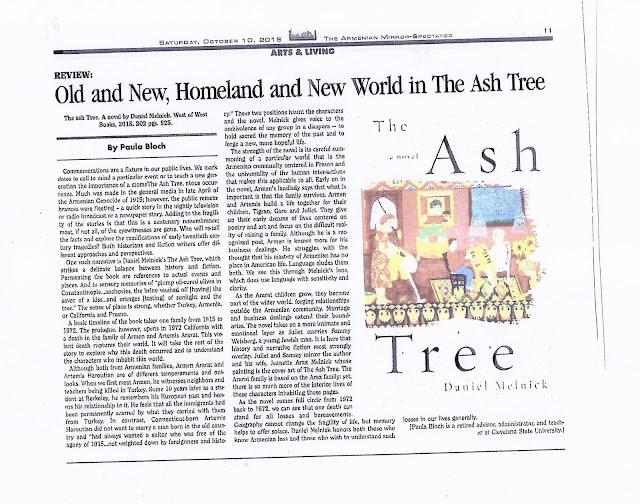 Here is the text:

Commemorations are a fixture in our public lives.  We mark dates to call to mind a particular event or to teach a new generation the importance of a momentous occurrence. Much was made in the general media in late April of the Armenian Genocide of 1915; however, the public remembrances were fleeting – a quick story in the nightly television or radio broadcast or a newspaper story. Adding to the fragility of the stories is that this is a centenary remembrance; most, if not all, of the eyewitnesses are gone.  Who will re-tell the facts and explore the ramifications of early twentieth century tragedies? Both historians and fiction writers offer different approaches and perspectives.
One such narrative is Daniel Melnick's THE ASH TREE which strikes a delicate balance between history and fiction. Permeating the book are references to actual events and places. And to sensory memories of “plump oil-cured olives in Constantinople…anchovies, the brine washed off [having] the savor of a kiss…and oranges [tasting] of sunlight and the tree.” The sense of place is strong, whether Turkey, Armenia, or California and Fresno.
A basic timeline of the book takes one family from 1915 to 1972. The prologue, however, opens in 1972 California with a death in the family of Armen and Artemis Ararat. This violent death ruptures their world.  It will take the rest of the story to explore why this death occurred and to understand the characters who inhabit this world.
Although both from Armenian families, Armen Ararat and Artemis Haroutian are of different temperaments and outlooks. When we first meet Armen, he witnesses neighbors and teachers being killed in Turkey. Some 10 years later as a student at Berkeley, he remembers his European past and honors his relationship to it. He feels that all the immigrants had been permanently scarred by what they carried with them from Turkey. In contrast, Connecticut-born Artemis Haroutian did not want to marry a man born in the old country and “had always wanted a suitor who was free of the agony of 1915...not weighted down by foreignness and history.” These two positions haunt the characters and the novel. Melnick gives voice to the ambivalence of any group in a diaspora – to hold sacred the memory of the past and to forge a new, more hopeful life.
The strength of the novel is its careful summoning of a particular world that is the Armenian community centered in Fresno and the universality of the human inter-actions that makes this applicable to all. Early on in the novel, Armen's landlady says that what is important is that the family survives. Armen and Artemis build a life together for their children, Tigran, Garo and Juliet. They give up their early dreams of lives centered on poetry and art and focus on the difficult reality of raising a family.  Although he is a recognized poet, Armen is known more for his business dealings. He struggles with the thought that his mastery of Armenian has no place in American life. Language eludes them both. We see this through Melnick's lens which does use language with sensitivity and clarity.
As the Ararat children grow, they become part of the wider world, forging relationships outside the Armenian community. Marriage and business dealings extend their boundaries. The novel takes on a more intimate and emotional layer as Juliet marries Sammy Weisberg, a young Jewish man.
It is here that history and narrative fiction most strongly overlap. Juliet and Sammy mirror the author and his wife, Jeanette Arax Melnick whose painting is the cover art of THE ASH TREE.  The Ararat family is based on the Arax family; yet, there is so much more of the interior lives of these characters inhabiting these pages.
As the novel comes full circle from 1972 back to 1972, we can see that one death can stand for all losses and bereavements. Geography cannot change the fragility of life, but memory helps to offer solace. Daniel Melnick honors both those who know Armenian loss and those who wish to understand such losses in our lives generally.
Posted by Daniel Melnick at 7:48 AM 0 comments