My now completed but unpublished novel “The Fall of the Berlin Wall” is about the musicians who appeared in my earlier novel “Hungry Generations” plus their families and friends – but now more than a decade and a half later. (In fact, the earlier novel - from iUniverse in 2004 - could logically and easily be published with "The Fall" as an 'origin story' or prequel.)
Jack Weinstein is now a successful composer, known for the symphonic “Hostage Music” commemorating the 1980 Iran hostage crisis. He is married to Sarah, the intense and irrepressible daughter of the late legendary Alexander Petrov. It is 1989 in Cleveland, where Jack is a college professor, and in late November, the couple’s marriage is collapsing. Jack and Sarah are visited during Thanksgiving week by her brother, Joseph Petrov, who is Jack’s closest friend and the hugely talented pianist son of Alexander. The week’s events are told by this trio of characters, and much of the novel revolves around Sarah – her suffering, her stinging repartee, and the friendships she forms and betrays. 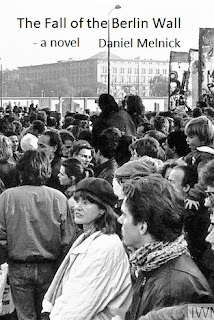 Friendship itself is a force in the lives of these characters, its potential success or failure for her and Jack, for the two brothers-in-law, and for the group surrounding the three characters. Also, there is the surprising bonus of the magnificent music played and imagined here, including Jack’s plans for a work responding to the fall of the Berlin Wall. The idea that long-standing barriers can collapse infuses the partly Dostoyevskyan novel, its vision of politics, of music, and of the human beings brought to life in this poignant, tragicomic work. At the end of the short novel are six ‘origin’ stories evoking what has been at stake in the rich and startling past of many of the characters.

Here's a synopsis of the work:

Two events in November 1989 mark the lives of the novel’s characters. One is the death of a woman discovered naked in the snow during a massive storm buffeting Cleveland on Thanksgiving. The other is the fall, two weeks earlier, of the Berlin Wall, and that upturning of the old order corresponds to a desire completely to change their lives for the characters.

Jack Weinstein wants to save his marriage to Sarah, the intense daughter of the late legendary pianist Alexander Petrov. He tries to confront her dissatisfaction and her shifting allegiances – whether to him, to her lover Dima, to her brother Joseph, or to her own unstable self. Sarah and Jack are in their forties and have a nearly sixteen-year-old daughter, Sue, who struggles in her own right.

Sarah’s brother, Joseph, is visiting this Thanksgiving week. He finds himself in the middle of the couple’s conflicts, and his role is made more difficult by the deep allegiance he feels to both his sister and his brother-in-law. The week’s events are told by this trio of characters. Joseph and Jack are musicians. Joseph Petrov is, like his late father, a brilliant piano virtuoso, and Jack is a classical composer; one of his compositions has just been nominated for a Grammy in contemporary classical music.

The Weinsteins’ friends have their own turbulence. And friendship – both healing and broken – becomes an issue in their lives. The Blacks, who live around the corner, are about to declare bankruptcy, for Jacob has been denied tenure and become a ‘freeway professor,’ teaching one class here, another there. The Sinclairs are mutual friends, and especially Robert Sinclair becomes the target of Jacob’s bitterness about his life.

One of the Weinsteins’ best friends is an artist and a bohemian of sorts, Tom Mubar, who is divorced and shares custody of his seventeen-year-old son, Paul. When Sarah’s affair with Dima collapses, she is drawn to Tom, who will understand – she believes – what a disaster her life has become. He has his hands full with his own urgent problems, and does not reciprocate her feelings.

Everything comes to a head when the Weinsteins celebrate Thanksgiving with their friends and Joseph. At dinner, disastrous confrontations erupt from the tensions brewing all week, and Sarah, already depressed and disoriented, plummets into potentially suicidal despair.

“The Fall of the Berlin Wall” is a poignant, tragicomic portrait of a marriage in trouble, of confusions in love and friendship, and of what may endure our collisions – whether it be love, art and music, or simply the flux and welter of our conflicting passions and needs. The short novel is followed by six stories evoking the rich and startling past of several of these characters.