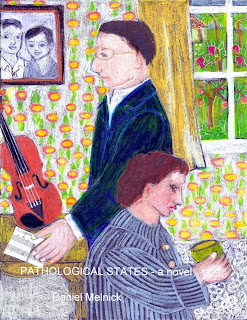 The best way to put yourself in a novel, an old friend once told me, is to leave yourself out. Not only have I removed myself here, but this prologue also leaves out my protagonist, spry but aging as he is, Dr. Morris Weisberg, pathologist and sometime Chief of Laboratory. Here, instead, you are to meet an antagonist, Dr. Bill Smith, who will appear later but significantly at the Montecito Veterans Hospital, located on the northern rim of Los Angeles in the desiccated hills some miles from suburban Northridge. Of course, these designations – hero or antagonist – are provisional, even questionable, and you must exercise your inalienable right as reader to revise and even to reverse them. For example, it would be possible to present Dr. Smith as a great wielder of knife and scalpel, a slayer of disease, a marbled figure of power and grandeur.
In the event, however, the surgeon seemed perfectly ordinary: not too short, nor too tall, and not too fat, though with a round face which was sometimes clouded, for his mouth could appear disapproving, and his brown eyes were somewhat assessive behind corrective lenses. On this June morning, dressed in his surgical garb, he wiggled his stiff fingers into latex gloves and felt how recalcitrant they were as he forced them in. Last night had been what he called a long, hard night, but let bygones be bygones, he thought. Smiling and a bit bleary, he strode confidently into the brightly lit surgical theater. He would perform an exploratory, which he invariably enjoyed.
The poor girl was dying, but now prepped and anesthetized, she was stretched out on the operating table.
“Good morning, Dr. Smith,” the nurses and the new anesthesiologist, Dr. Maury, said – he was a handsome man; swarthy was the term. The line of his strong neck led down to broad shoulders and what looked to be a lean, fine physique. Dr. Maury smiled politely at him, and Dr. Smith immediately turned to look at what was on the menu today.
The skin of the abdomen was bared before him as he picked up the scalpel with his stiffened fingers. Perhaps he would give her a few months more of life, he thought as he automatically cut through flesh, fat, and muscle. His nurse placed clamps and a drain so no blood welled in the cavity. At its bottom, there it was, the pancreas riddled with cancer. Searching for spreading metastases in liver and spleen, his rough fingers pushed the pancreas aside.
The heart monitor began irregularly to beep, and it stopped.
“Dr. Smith, her heart has…”
A slight tremor convulsed the body on the table, and Dr. Smith pulled his bloody gloved hands away.
“Adrenaline. Syringe,” he said as he glanced about, numb and unsteady. Dr. Maury was staring alarmed at him.
He plunged the needle into the heart. Immediately, he knew it had missed its target, and he lifted, shifted, and plunged it once more into the chamber of the heart.
------------------------------------------------------------------------------------------------------------------------

The novel is a fictionalized memoir about my family, with names changed. My late parents were secular Jews and devoted to classical music. Of my two (retired) brothers, one is a photographer, and the other is a poet. Something like the novel’s disaster at work and desperation at home did descend on the family around the year 1962, though at the time I was away from home as a freshman in college. The four family member take up the telling of the chapters, though I do record and comment in the telling. For the most part, then, I leave myself out of the tale – which may be the best way to put yourself in, as I mention a novelist friend of mine told me.

Here’s a brief summary of the novel:   It is the year of the Cuban Missile Crisis and Cold War hydrogen bomb testing. Dr. Morris Weisberg studies the effects of nuclear radiation and the causes of cancer, and he, his wife, and their turbulent sons live in suburban Los Angeles. Each family member strives to find some pleasure and affirmation, whether in science, art, sex or music, as they face the distortion and emptiness beneath the surface beauty of California life. Dr. Weisberg is Chief of Laboratory at the Montecito Veterans Hospital, where a surgeon causes a death during an operation. When Morris discovers the truth, his Hospital Director tries to cover up the malpractice. Crises descend, then, at work as well as in the family.
The novel is rich and compelling for its drama of emotional abuse and sexual awakening, its non-nostalgic view of L.A. in the sixties and of growing up as well as growing old there, and its picture of the explosion of American power in the Kennedy years. There are also the roles played by science and music in the life of Morris Weisberg, the sense of Jewish-American identity after the Holocaust, and finally the occasional humorous echo of Don Quixote.
Posted by Daniel Melnick at 2:08 PM